​
The advent of inexpensive DNA testing has added a valuable tool for furthering genealogy research.  In particular Y-DNA testing helps trace the male side of one’s family tree since the Y chromosome gets passed mostly unchanged from father to son.  John S Howard, son of Harold Linwood Howard, initially chose to have his DNA tested through ancestry.com and was rewarded with a few close Y-DNA matches.  Ancestry.com also analyzed John's genetic ethnicity.  "Genetic ethnicity" is, according to ancestry.com, where John's ancestors lived hundreds—perhaps even thousands—of years ago.
​The estimated percentages as of July 2018 are (image from ancestry.com): 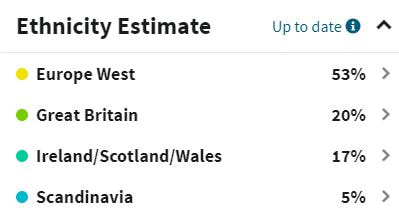 John decided to be re-tested by FamilyTreeDNA after ancestry.com discontinued Y-DNA testing and removed that data from its online website.  FamilyTreeDNA offers one of the world’s most extensive DNA databases for comparison. It also has various projects that one can join which focus on surname, geographic region, ethnicity, etc.  John joined the Howard Surname Project and found that his Y-DNA test results, carried out to 111 markers, closely match others that are grouped under the Obadiah/Seth Howard subsection.  Raw data matches can be viewed by going to the following internet site and scrolling down to the Obadiah/Seth Howard section:  http://www.familytreedna.com/public/howarddnaproject/default.aspx?section=ycolorized.  One additional result that was returned was the haplogroup.  It is designated as either R-M269 (by FamilyTreeDNA) or R1b1a1a2 (by the International Society of Genetic Genealogy).

The table below shows Y-DNA combined matches from ancestry.com and familytreedna.com.  DNA test kits were analyzed at a varying number of markers depending on what each participant wanted to pay.  Some participants, including John, trace their heritage back to Obadiah Howard (born ca. 1736, died 1804) and one to Stephen (born before 1729, died 1777) who was probably Obadiah's brother.  Other close matches trace their ancestors back to contemporaries of Obadiah in the Carolinas and Georgia.  How these men are related to Obadiah has yet to be determined. The last two samples have no Howard surname. One has a known illegitimacy involved, and the other may be the same or have an adoption involved.