Related families include Avery, Breed, Dever, Gill, Hart, Hite, Jennings, Kavanaugh, Robertson, Sanders, Shropshire, Stephens, Wallace, Wheeler, Woods, and others.  Some of these related families are discussed on this website.  Click here to jump to this section.
Y-DNA testing has been done by John S Howard, son of Harold Linwood Howard, and the resulting markers are consistent with Obadiah Howard being a very closely related ancestor.  Click on﻿ D﻿NA﻿ to see a more complete discussion.

An article summarizing the Howard ancestry of John S Howard was written for the Nov-Dec 2010 issue of The Howard Historian newsletter, which is published periodically by Karen LaClergue.  An updated version of the article is presented here. 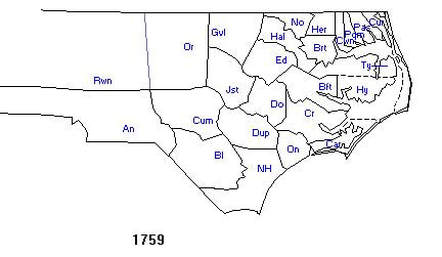 https://www.mapofus.org/northcarolina/ Brt=Bertie On=Onslow
Ancestry of Obadiah Howard
​
There is no definitive proof who Obadiah's parents were, but my belief is that they were Stephen Howard (bef. 1694-1745) and his wife Sarah (last name not known for certain).  It appears that Stephen was born in southeastern Virginia in the late 1600s and then migrated south to North Carolina, first to Bertie County and finally to Onslow County.  He died there about July 1745 when his widow Sarah and son Edmund presented Stephen's unsigned will for probate (Ref. Onslow County, NC Court Minutes 1741-1768, July 1745.  Ref. NC Colonial Records V22 p494 and Vol14 p273).  A witness to the will's authenticity was Mary Powell, who would later marry Stephen [Jr].  No copy of the actual will has been located.

​Stephen Howard was mentioned in his brother James' 1729 Bertie County NC will, along with brothers Edward, John and Joseph (Ref. North Carolina, Wills and Probate Records, 1665-1998 on ancestry.com).  This establishes the five brothers but not their father or mother.

As indicated above Stephen Howard's wife was named Sarah and one son was named Edmund.  Additional information comes from the will of John Sanders (see NC Historical and Genealogical Register, Vol1, p388; also North Carolina Will Abstracts 1660-1790 will date 1/6/1732, probated 4/3/1733) where Stephen is called Uncle Stephen.  This will also mentions two sons of Uncle Stephen: Edmund and Stephen Howard.

There are three ways that Stephen Howard could have been an uncle of John Sanders.  Most researchers have interpreted John Sanders' will to mean that his father had a sister Sarah Sanders who married Stephen Howard, thus making Stephen an uncle.  A second way, just as likely and more direct, is for John's mother to have been born a Howard and have a brother named Stephen.  In this manner Stephen would be a blood uncle.  The third way is for John's mother (maiden surname unknown) to have a sister named Sarah who married Stephen Howard.  The "uncle" designation is valid in each case.

In my estimation the most straightforward answer is for John Sanders' mother to have been a Miss Howard whose brother was Stephen.

Stephen and Sarah Howard are believed to have had at least two additional sons:  Obadiah and Nehemiah.  Since they were not mentioned in John Sanders' 1732/3 will they were probably born afterwards but before Stephen's death in 1745.  Unfortunately Stephen's will no longer exists to conclusively prove this.  One source that does tie together the other two sons, Obadiah and Nehemiah, is Kentucky Genealogy and Biography, Volume III, by Battle, Perrin and Kniffin, 1885.  Page 96 discusses the ancestry of John C Howard (who probably wrote the article on this page) born 1828 in Butler County KY to James and Ann (Carson) Howard.  James was the grandson of Stephen [Jr] and Mary (Powell) Howard of North Carolina. “Stephen’s father had four sons:  Edmund, Stephen, Nehemiah and Obadiah”.  The father therefore would be Stephen [Sr], husband of Sarah.

Little is known about Obadiah's childhood. Apparently his mother died shortly after his father's death.  It is assumed that his older brothers took care of him and Nehemiah. They left Onslow County by 1755 and moved to Orange County.   There Obadiah met and married Priscilla Avery Breed and became a member of the Separate Baptist church which had been established in 1755 by Rev. Shubal Stearns.  Priscilla's father Joseph was one of Stearns' assistants.

After a few years Obadiah, Priscilla and others followed Rev. Philip Mulkey southward into South Carolina.  They established churches along their path and settled about 1762 in the Fairforest Creek "up-country" area of South Carolina.  Obadiah stayed there for many years and served in the Revolutionary War along with his brother Nehemiah.   In the late 1790's he and other church members began migrating to Barren (now Monroe) County Kentucky and became members of the Mill Creek Baptist Church.  The names of Obadiah and some of his immediate family members appear in the church membership records there as early as 1798, although his permanent residence in the 1800 federal census is still listed in Union County, SC.  John Mulkey, descendant of Philip, was the first preacher of record.  This church, its cemetery, and environs is now "Old Mulkey Meeting House State Historic Site" (established in 1931).

​Obadiah, who died just a few years later in 1804, and his wife Priscilla are buried in Old Mulkey Cemetery near Tompkinsville just north of the Tennessee border.  A video of Obadiah's grave and others nearby can be seen at the following URL:        https://drive.google.com/file/d/0B7tKonHh8hKzMlRnWkxPQ043VXc/view?usp=sharing

​For more on Priscilla Breed's ancestry please go to the section Families Related to the Howards.