Introduction to the Howard and Bratton Families

The family tree for these and associated families can be viewed on Rootsweb by clicking on Howard/Bratton.  The tree reveals German ancestors on both sides.  The Howard lineage can be traced back to German settlers in the Shenandoah River valley of Virginia beginning in 1732.  The Bratton lineage is connected to settlers of the Germanna colonies of Virginia established in 1714 and later.

For more detailed information on Howard or Bratton genealogy on this website, click on one of these links: 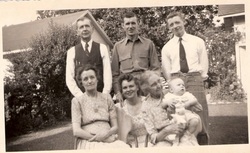